My Master’s thesis (presented here) was finally published in the April issue of TOIS. Good time to recap my second academic adventure.

Six years ago, when I considered graduate studies (10 years after graduating my B.Sc) I was CTO in a company that was at a crossroads, leading to very short term product and technology thinking. Looking for a change, I felt the academic world offered a space where deep, broad thinking was preferred over nearsighted goals. So I reduced my position at work, and took on studies back in the Technion. 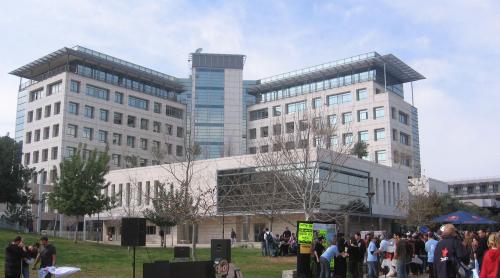 I finished the needed courses in a year and a half, but the thesis took much longer. Friends warned me it’s difficult to context switch between work and research, not to mention family, and they were indeed right. Still, I wanted to feel the academic life again, and figure out if I wanted to pursue it full time and continue to a PhD.

The conclusion gradually distilled into a resounding No. I’ll stop at Master’s. One reason was my allergic reactions to too much maths, so prevalent in the Technion, but there was also something deeper. I realized that the user experience is where I’m at, and core computer science research is far from it, except perhaps HCI departments.

There is a significant gap between the cutting edge in academy and in practice. A paper may be worth publishing due to a statistically significant increment of 5% in relevancy (see the major interest around the Netflix prize), whereas actual users will barely feel the difference. On the other hand, stuff that is considered “commodity” in the academic world, can make big waves if implemented well in the industry, and for a good reason. Companies have built a major user following (and a fortune…) just by doing excellent and usable implementation of basic CS algorithms.

So if I have to choose between making a the research community happy, or making end users happy, I definitely choose the latter. Perhaps I’ll go back to do my PhD in another 10 years, but until then, it’s Farewell Academia!

Today I gave my master’s thesis talk in the Technion as part of my master’s duties. Actually, the non-buzzword title is “Concept-Based Information Retrieval using Explicit Semantic Analysis”, but that’s not a very click-worthy post title :-)…

The whole thing went far better than I expected – the room was packed, the slides flew smoothly (and quickly too, luckily Shaul convinced me to add some spare slides just in case), and I ended up with over 10 minutes of Q&A (an excellent sign for a talk that went well…) 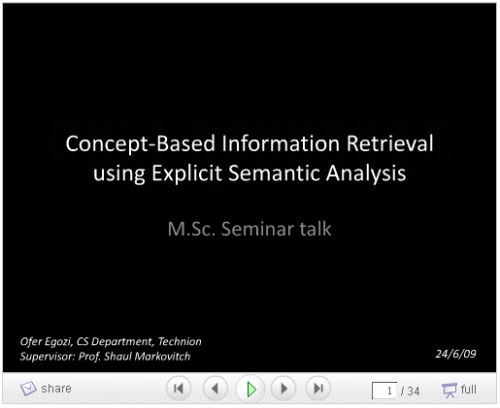 BTW – anybody has an idea how to embed slideshare into a hosted blog? doesn’t seem to work…