This morning I came across a nice little people search demo by Martin Atkins. It’s mainly a wrapper over Social Graph API, but helps illustrate the public social graph. Now, Tantek Çelik is one of the main advocates for Microformats, which in turn generate a lot of the XFN data that feeds SGAPI. So it was quite a surprise to feed his name and see this: 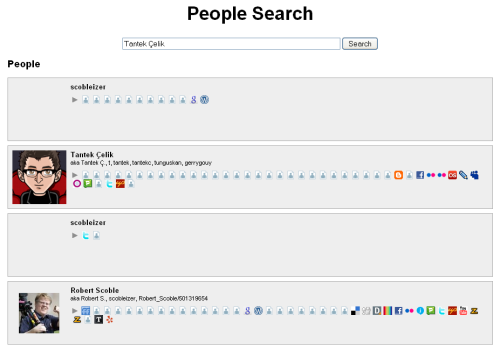 What happened here? a quick check on SGAPI led to some strange findings. Turns out that Robert Scoble’s old blog at scoble.weblogs.com is listed as strongly conncted to Tantek’s blog identity. I then went on to check out that blog – no XFN or FOAF to Tantek there. So where did that come from?

A more elaborate dive into SGAPI’s more detailed output showed that Scoble was listed as referencing Tantek with both XFN attributes of “me” and “met“. In plain English, this means that Robert Scoble said “I am Tantek Çelik, plus I also met him in person!”. So what could cause this, except for some serious case of schizophrenia?

My humble guess is that Scoble, some time ago, listed Tantek as a “met” contact on his old blog, but with a magnificient little typo, left out the ‘t’.  He then discovered the mistake and fixed it. But the Googlebot caught both cases, and added them both as relations. Now why would they do that? shouldn’t new data replace old data? well, that’s what other users of SGAPI are asking, see the discussion over at the group. Turns out the SGAPI data is not yet as timely as the main index, and Brad Fitzpatrick promises this will improve soon enough.

Considering the upcoming social diet, it better will…

Update: Hadar pointed out another example, where Chris Messina gets identified with TechCrunch UK… it’s indeed reflected in SGAPI, and I tracked this down to erroneous XFN tagging in an obscure 2006 TCUK post. Indeed demonstrates a weakness of the unmoderated, inherently decentralized XFN-based graph building. Still, for now it’s the only open standard we have, until some higher, post-processing open layer will emerge.

This entry was posted in Uncategorized and tagged Identity, Social Graph, XFN. Bookmark the permalink.