While scanning for worthy Information Retrieval papers in the recent SIGIR 2009, I came across a paper titled “Learning to Recommend with Social Trust Ensemble“, by a team from the University of Hong Kong. This one is about recommender systems, but putting the social element into text analytics tasks is always interesting (me).

The premise is an interesting one – using your network of trust to improve classic (Collaborative Filtering) recommendations. The authors begin by observing that users’ decisions are the balance between their own tastes, and those of their trusted friends’ recommendations. 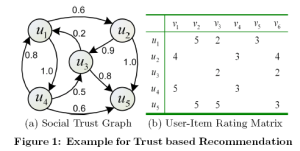 Then, they proceed to propose a model that blends analysis of classic user-item matrix where ratings of items by users are stored (the common tool of CF), with analysis of a “social trust graph” that links the user to other users, and through them to their opinions on the items.

This follows the intuition that when trying to draw a recommendation from behavior of other users (which basically is what CF does), some users’ opinions may be more important than others’, and the fact that classic CF ignores that, and treats all users as having identical importance.

The authors show results that out-perform classic CF on a dataset extracted from Epinions. That’s encouraging for any researcher interested in the contribution of the social signal into AI tasks. 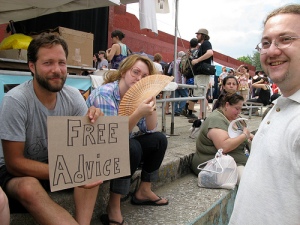 However, some issues bother me with this research:

The last point is of specific interest to me, having combined keyword-based retrieval with concept-based retrieval in my M.Sc. work. I could easily show that the resulting system outperformed each of the separate elements, but to counter the above questions, I further tested combining other similarly high performing methods to show performance gained there was much lower, and also showed that the combination could take a state of the art result and further improve on it.

Nevertheless, the idea of using opinions from people you know and trust (rather than authorities) in ranking recommendations is surely one that will gain more popularity, as social players start pushing ways to monetize the graphs they worked so hard to build…